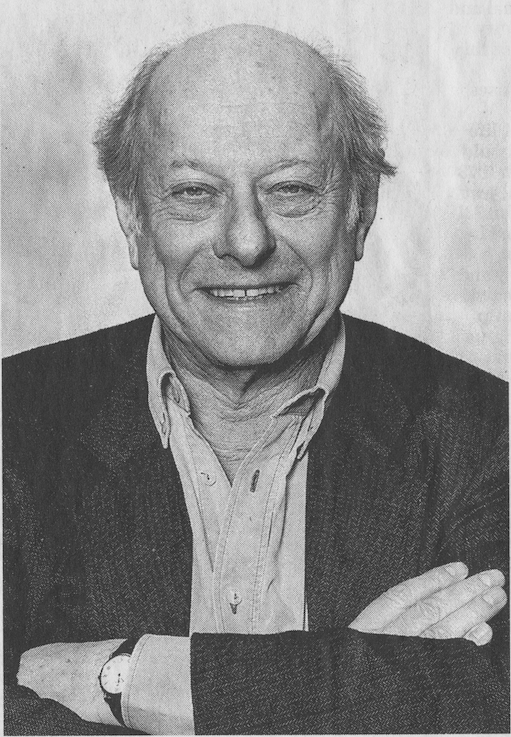 One of the great regrets of my life is that I was usually ‘too busy’ to see Shura. The business was mainly delusion; the reality was  his friendship, conversation, and wisdom. I got far too little of it.

I didn’t know him in his glory days of the 1950s and 1960s, when he and his Joan presided over  Chelsea’s bohemia, from their shabby five-story house and the Chelsea Arts Club.  They were both haute Bohemians, irreverent, unconventional, witty, funny, artistic, high-spirited,  artistic, and in her case, patrician. They did not reject the norms of bourgeois life, they simply ignored them.

I don’t remember exactly when I first met Shura..How I met him was through my mother, Galia,  and Galia met him (I think) through their mutual friend George Hayim; the three linked together by their birth and upbringing in  China.

Shura entered my life in the early 1980s. He used to visit my then widowed mother in her flat in Paddington, two Russian-born  survivors from calamitous times. I remember him  , as I still do, as a prodigious, but never boring raconteur,  with a mellifluous speaking voice, which he could deploy in at least three languages, English, Russian, and Chinese.

Since I was ‘too busy, I would   wander in  and out of my mother’s flat, wolfing the zakuski she had  prepared,  leaving her  to the flow of Shura’s  anecdotes  and  Russian  gypsy music.

Following my mother’s death in 1987, my   family moved  to Sussex, and for 20 years Shura more or less disappeared from my life. He was, after all,  my mother’s friend! Then in the early 2000s,  I established a proper London base, and we re-connected.

Above all, we corresponded.  I have  dozens  of his letters, witty, joky, name-dropping, wise, sometimes scabrous (in Russian), wildly  politically incorrect,  and often sad. They were  frequently  enlivened by what he called his  ‘quattrains’, composed at breakfast.

‘She was a Queen’, he wrote after the death of his beloved Joan in April 2007,

‘who wore her crown askew.
Short sighted, but with piercing eyes of blue.
An angel with good earth stuck to her wings,
She understood all high and lowly things
-And even me, a mixture of the two’.

I got to know of Shura’s shabby treatment by the British government, which,  for 16 years after the war,   denied him a British passport – and therefore  the job as foreign correspondent for a national newspaper which he had been offered – apparently on suspicion of his being a Soviet agent..  ‘What made my case so outrageous’, he once wrote to me,  ‘is the fact that I served 4 years (18 days of fighting, the rest starving as a  [Japanese] POW) [as a volunteer]  in the British Army’. As far as I know, no apology or compensation was ever tendered. Bohemia gained, but an acute political voice was lost.

For Shura was intensely interested in world events. He was a voracious reader, especially of Russian history. He was fascinated by the atmosphere of the Lords, where I sometimes invited him for lunch. The peers’ dining room, he said, reminded him of ‘a great beehive full of retired bees, locked together in an intimate buzz’.

In our correspondence, his comments on world affairs became increasingly gloomy. ‘The offsprings of the virulent Russian right-wing movements [of my youth] are beginning to creep through the cracks and crevices of post-Soviet Russia’ he wrote me on (27 October 2008)  On the whole he was pro-Russian. He disliked the Ukrainians, on account of their wartime collaboration with the Nazis, and was strongly   Islamophobic, convinced that Turkey was plotting to establish a new Caliphate.  But humour kept breaking in. There were grounds for hope in the fact that the vodka Moslems had become used to drinking in the former Soviet republics might save them from fanaticism.

Most of history’s wars and clashes

Are by men who sport moustaches

Did not stay at home to crochet,,

But with fearsome application,

(Not forgetting that newcomer,

So if it is World Peace you’re craving

‘Wounds’, Shura wrote, ‘never heal but they fall asleep’.  Joan’s death could not dim Shura’s zest for  life and interest in  people. He could now indulge without guilt his love for young, but not exclusively young, female company. ‘I’ve got a lovely Russian girl from the Altai region …She is painting my portrait’. ‘Last week I had two lovely Georgian ladies to dinner…’ On his 85th birthday ‘I was introduced to a blind date -my first ever. At my age I am lucky that I can see’.  On his 90th birthday, ‘I strained a tendon on my knees dancing….’

‘I am becalmed at 92’ he wrote me in 2015, before revealing his social calendar for the week: meeting the ‘brilliant novelist Boris Akunin’, being taken out by four Chinese ladies, one of them the first Chinese lesbian he had met, a Sunday lunch with Charlotte Johnson, mother of another Boris, several other engagements. This was soon after a dinner with John Le Carre and an Israeli women colonel from Mossad which lasted four hours. What had his life been like before it was becalmed?

By the time I knew him, Shura’s love of life was accompanied, but not overshadowed, by intimations of mortality. These had probably been with him from the start. He conceded he was a hypochondriac. Joan used to greet him at breakfast with the words:    ‘Good morning, Shura, what is your terminal disease of the day’. When, after Joan’s death,  he complained of one such ‘to my Chinese girlfriend, just back from Shanghai’, she shot back: ‘No problem -you make problem’.

But old age crept on. Funeral wakes for friends -Joan described them as ‘cocktail parties for the geriatric set’-  became ever more frequent.

‘My ranks of friends are getting serried,
Another one has just been buried.
I often wonder what I’m doing.
Mourning their loss or simply queuing?’

Shura deliberately played up his growing physical weakness in order to emphasise his youthfulness of spirit:

His poem Death by Hubris set his  standard for old age:

I try to stay a young old man
According to a master plan.
My secret, to indulge myself,
Drink wine,  with every scrumptious meal,
And never lose my sex appeal.
And after ninety something years,
Drown in a sea of women’s tears.

Reading through his letters has filled me with nostalgia and remorse. ‘If you feel like a jolly meal at the Chelsea Arts or a Chinese -let me know. Shura’. Much too  often I was ‘too busy’ to take him up

We will remember and mourn you Shura, the eternal ‘young old man’. 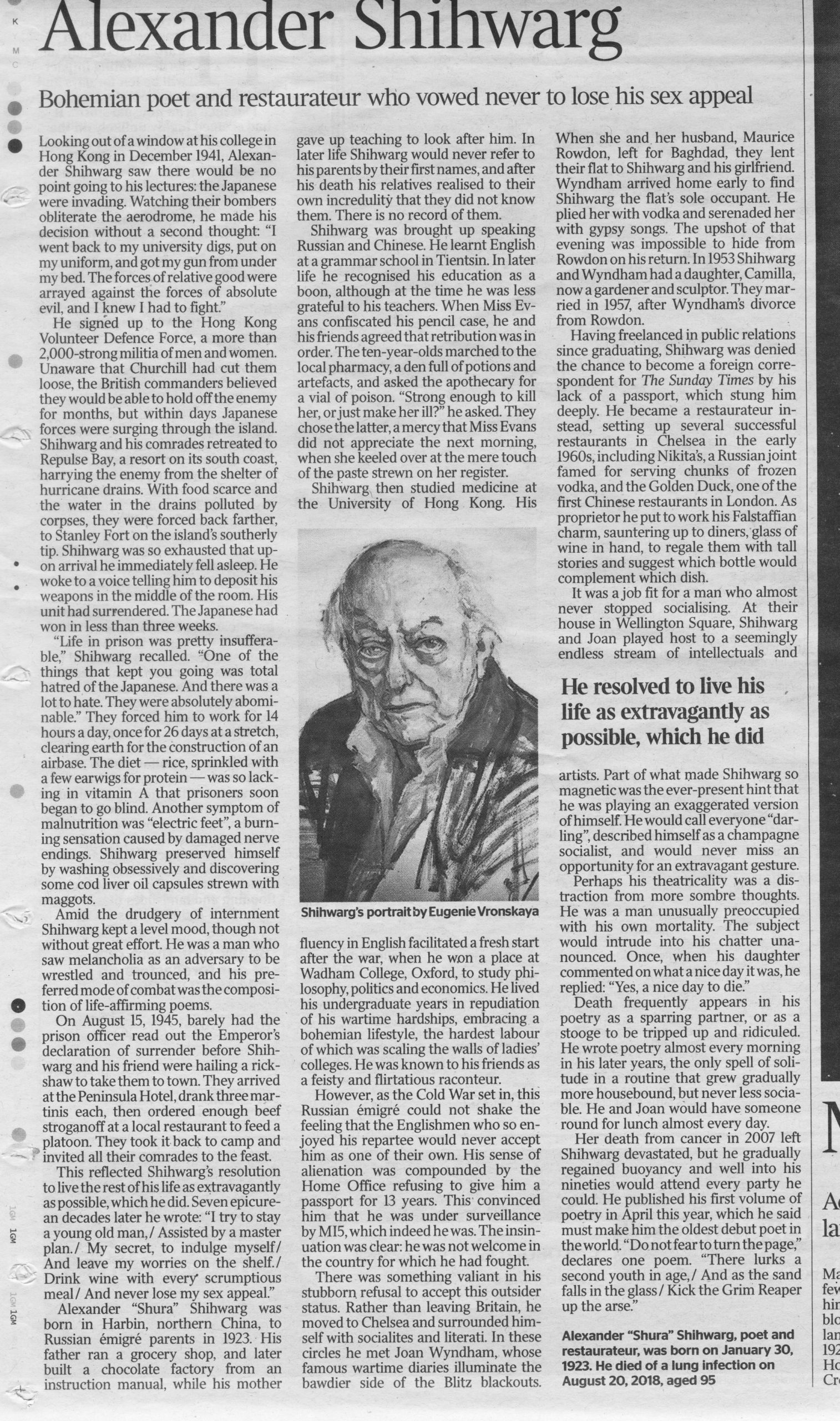 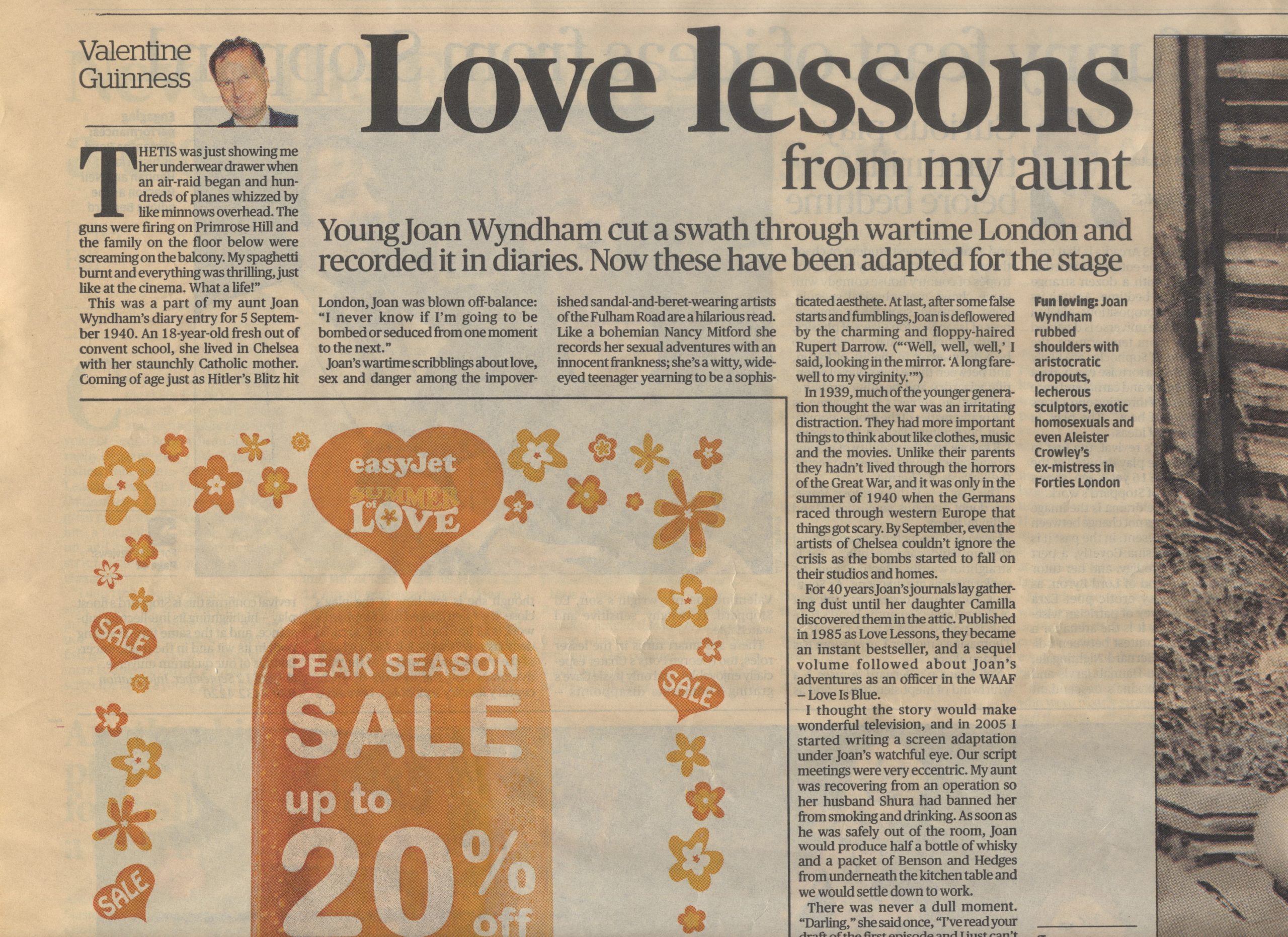 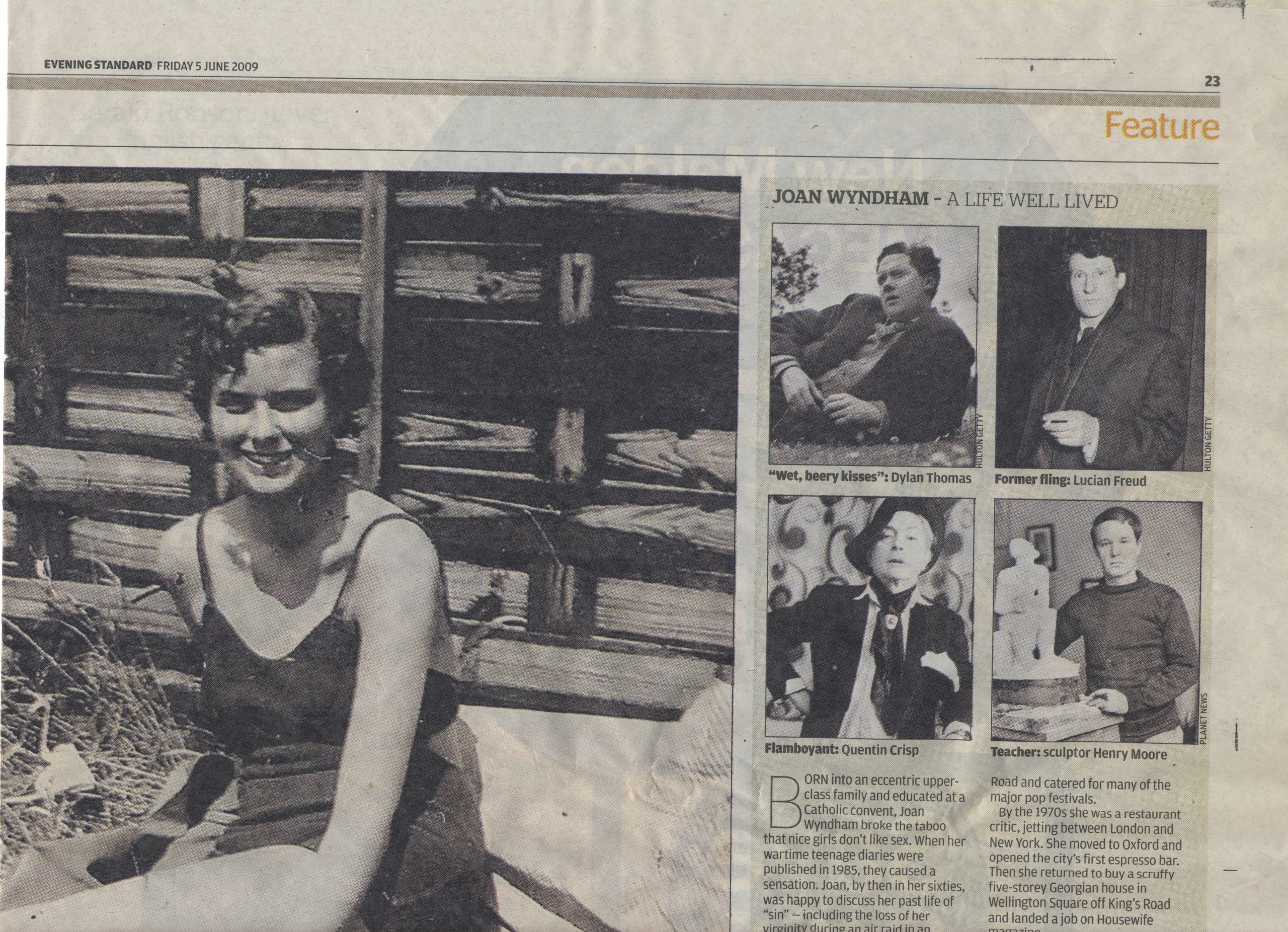 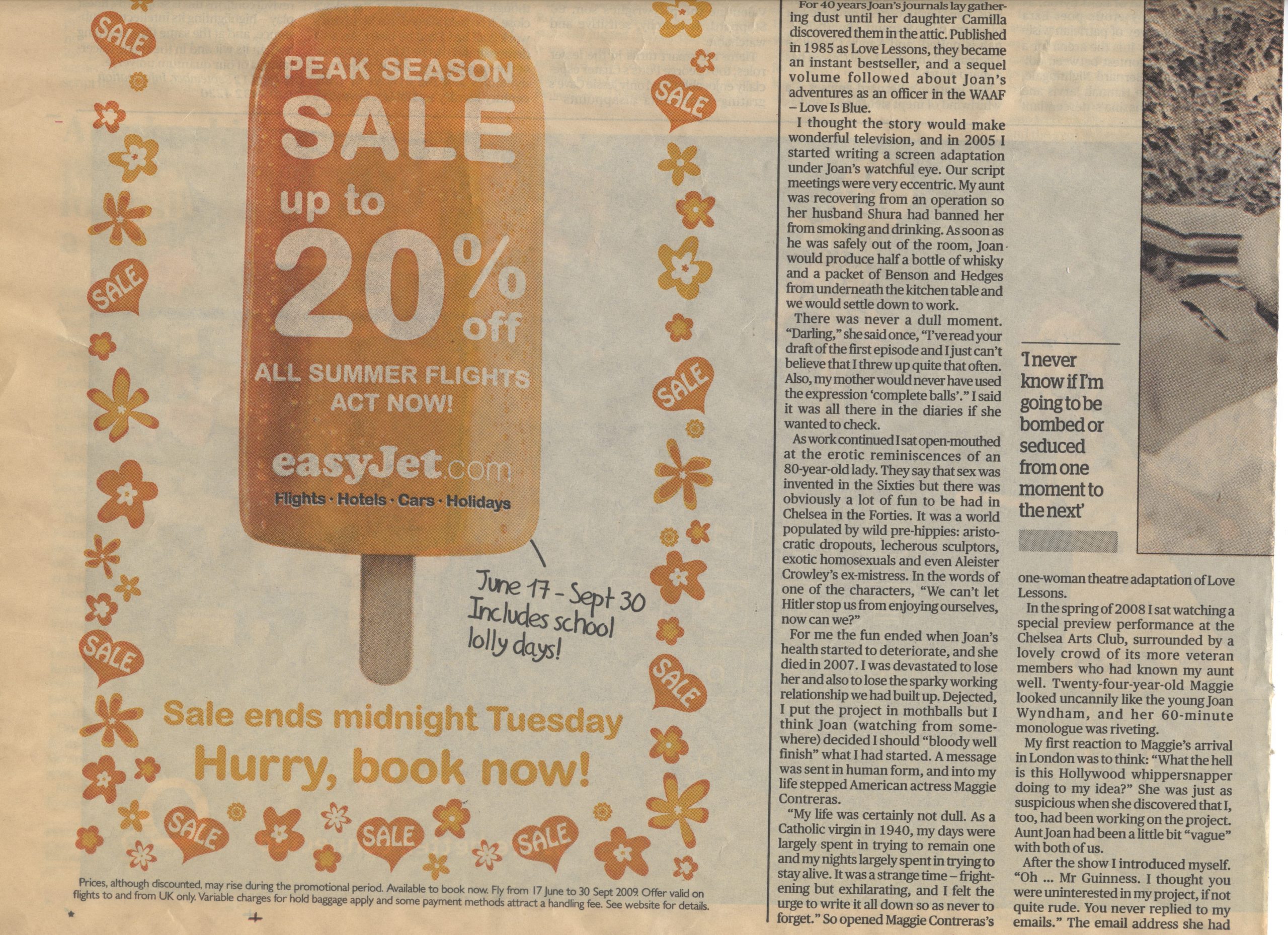 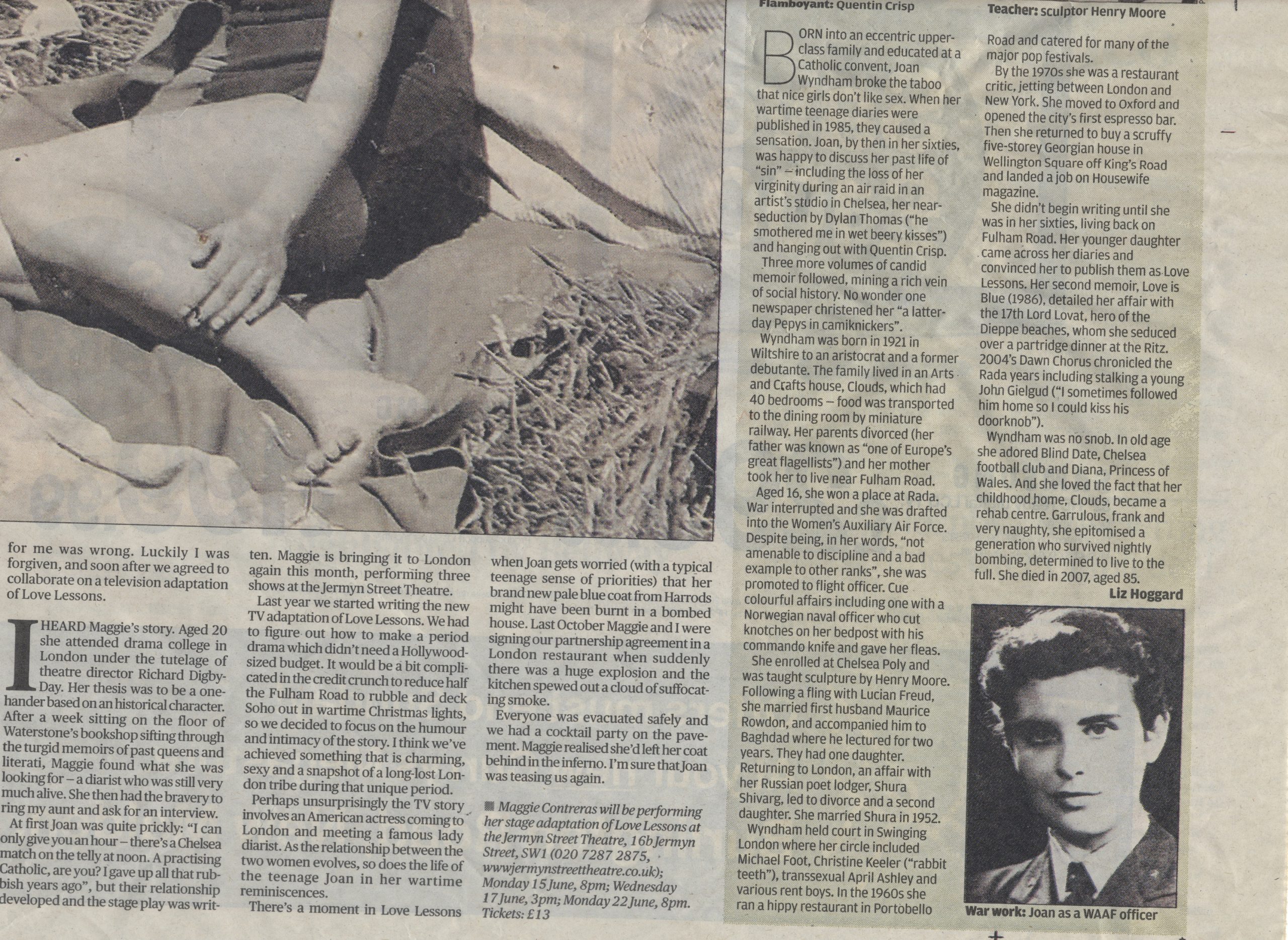